Takeda gets EU approval for ALUNBRIG in ALK+ NSCLC

Takeda Pharmaceutical has secured expanded approval for ALUNBRIG (brigatinib) in the European Union (EU) to use the tyrosine kinase inhibitor for the treatment of a particular lung cancer population.

The latest approval from the European Commission (EC) authorises ALUNBRIG to be used as a monotherapy for the treatment of adults having anaplastic lymphoma kinase-positive (ALK+) advanced non-small cell lung cancer (NSCLC), who did not get any prior treatment with an ALK inhibitor.

The EC’s approval comes in the wake of a positive opinion adapted by the Committee for Medicinal Products for Human Use (CHMP) in February 2020.

Takeda won the expanded approval for the drug based on the data from the phase 3 ALTA-1L clinical trial.

The late-stage trial assessed the safety and efficacy of the tyrosine kinase inhibitor in comparison to crizotinib in patients having ALK+ locally advanced or metastatic NSCLC who did not get prior treatment with an ALK inhibitor.

Results from the ALTA-1L trial demonstrated ALUNBRIG to be superior compared to crizotinib with significant anti-tumor activity seen across patients with baseline brain metastases.

According to Takeda, after more than two years of follow-up, the tyrosine kinase inhibitor lowered the risk of intracranial disease progression or death by 69% in patients with brain metastases at baseline, as evaluated by a blinded independent review committee (BIRC).

The drug was also shown to have brought down the risk of disease progression or death by 76% in patients with brain metastases at baseline as assessed by the investigators.

Takeda global oncology business unit president Teresa Bitetti said: “At Takeda, our commitment to patients drives us as we seek to advance care and address the unmet needs of the lung cancer community.

“We are proud of the positive results ALUNBRIG has demonstrated in the first-line setting, including strong overall and intracranial efficacy, and look forward to making ALUNBRIG available to newly diagnosed ALK+ NSCLC patients in Europe.”

The Takeda drug was granted accelerated approval in the US in 2017 for ALK+ metastatic NSCLC patients who have progressed on or cannot tolerate crizotinib.

The tyrosine kinase inhibitor is approved currently in over 40 countries, including the US, Canada and the European Union, for the treatment of patients with ALK+ metastatic NSCLC who have taken crizotinib, but their condition worsened or they cannot tolerate crizotinib. 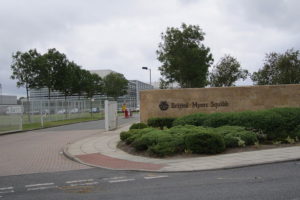 BMS gets EC approval for Opdivo, Yervoy combo for treatment of metastatic NSCLC