Biopharmaceutical company Ocugen has announced that its co-development partner, Bharat Biotech, announced the results of the first interim analysis of its Phase 3 study of COVAXIN, which is a whole virion inactivated Covid vaccine candidate.

Biopharmaceutical company Ocugen has announced that its co-development partner, Bharat Biotech, announced the results of the first interim analysis of its Phase 3 study of COVAXIN, which is a whole virion inactivated Covid vaccine candidate.

COVAXIN showed a vaccine efficacy of 81%.

Ocugen board chairman, CEO and co-founder Dr. Shankar Musunuri said: “We are thrilled with the interim efficacy results of Bharat Biotech’s Phase 3 trial of COVAXIN in India. These results, which in part suggest significant immunogenicity against the rapidly emerging UK variant, represent an additional step towards outlining the regulatory pathway for EUA and approval in the United States.

“COVAXIN, a whole virion based vaccine candidate, is designed to fill a significant unmet need in our national arsenal of vaccines against COVID-19.”

Ocugen member of the vaccine scientific advisory board Dr. Bruce Forrest said: “The results from the interim analysis of Bharat Biotech’s Phase 3 trial of COVAXIN mark a milestone in the development of another critical vaccine option for the US market.

“COVAXIN has been shown to induce immune responses against multiple protein antigens of the virus potentially reducing the possibility of mutant virus escape. This breadth of immune responses has been demonstrated by ability of antibodies induced by COVAXIN to neutralize the UK variant of SARS-Cov-2.”

The primary endpoint of this phase of the clinical trial is based on the first occurrence of PCR-confirmed symptomatic (mild, moderate or severe) Covid-19 with onset at least 14 days after the second study vaccination in serologically negative (to SARS-CoV-2) adult participants at baseline.

The first interim analysis is based on 43 cases. Out of the 43 cases, 36 were observed in the placebo group as against seven in the COVAXIN group, leading to a point estimate of vaccine efficacy of 80.6%.

The interim analysis featured a preliminary review of the safety database, which indicated that severe, serious, and medically attended adverse events occurred at low levels and were balanced between vaccine and placebo groups.

Analysis from the National Institute of Virology showed that vaccine-induced antibodies can neutralise the UK variant strains and other heterologous strains. 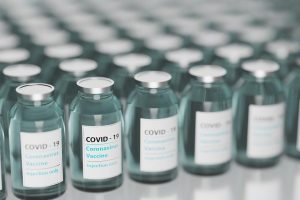