GlaxoSmithKline (GSK) has announced plans to construct a new campus for biotechnology and early-stage life science companies in Stevenage, England.

GlaxoSmithKline (GSK) has announced plans to construct a new campus for biotechnology and early-stage life science companies in Stevenage, England.

The company is looking for a development partner to transform land in its existing 92-acre research and development site in Stevenage into what it claims to be one of Europe’s largest life science campuses in the region.

Plans for the new facility were developed in partnership with Stevenage Bioscience Catalyst (SBC), Stevenage Borough Council, the Local Enterprise Partnership (LEP) and the UK government.

As part of the project, GSK also plans to sell about 33-acres of land to generate as much as $550.4m (£400m) in new investment from the interested developer, who will construct the new campus.

The company plans to choose a development partner later this year and aims to commence work on the master plan for the new campus in 2022.

Upon completion, the new facility will create 100,000m2 of total space for commercial life sciences research and development and nearly 5,000 jobs over the next five to ten years.

“Our goal is for Stevenage to emerge as a top destination for medical and scientific research by the end of the decade.

“We are excited to find a development partner to realise our vision to foster the next generation of world-class scientists and biotechnology firms in Britain.” 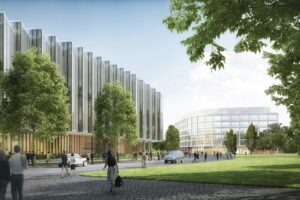