AstraZeneca announced that IMFINZI (durvalumab) has been approved in the US as a 1st-line treatment for adult patients with extensive-stage small cell lung cancer (ES-SCLC) in combination with standard-of-care (SoC) chemotherapies, etoposide and either carboplatin or cisplatin (platinum-etoposide).

The approval by the US Food and Drug Administration was based on positive results from the Phase III CASPIAN trial showing IMFINZI in combination with SoC platinum-etoposide demonstrated a statistically significant and clinically meaningful improvement in overall survival (OS) versus SoC alone.

SCLC is a highly aggressive, fast-growing form of lung cancer that typically recurs and progresses rapidly despite initial response to chemotherapy.

Dave Fredrickson, Executive Vice President, Oncology Business Unit, said: “The US approval of IMFINZI brings a new medicine to extensive-stage small cell lung cancer patients in urgent need of new options. IMFINZI is the only immunotherapy to show both a significant survival benefit and improved response rate in combination with chemotherapy for these patients, an important step forward in treating this devastating disease.”

Jonathan Goldman, MD, Associate Professor of Hematology & Oncology, UCLA Medical Center, Santa Monica, California and a lead investigator in the Phase III CASPIAN trial, said: “Patients with extensive-stage small cell lung cancer continue to face a poor prognosis, and finding new medicines to improve outcomes in this setting has been a formidable challenge. The CASPIAN trial enables clinicians to choose durvalumab in combination with etoposide and either carboplatin or cisplatin, making this an important new 1st-line treatment option for patients that is both effective and well-tolerated.”

The second experimental arm testing tremelimumab added to IMFINZI and SoC recently read out but did not meet the primary endpoint. Details will be presented at a forthcoming medical meeting.

The most common adverse reactions (≥20% of patients with extensive-stage SCLC) were nausea, fatigue/asthenia and alopecia.

The CASPIAN trial used a fixed dose of IMFINZI (1500 mg) administered every three weeks for four cycles while in combination with chemotherapy and then every four weeks until disease progression as a single medicine. As part of a broad development program, IMFINZI is also being tested following concurrent chemoradiation therapy in patients with limited-stage SCLC in the Phase III ADRIATIC trial with data anticipated in 2021. 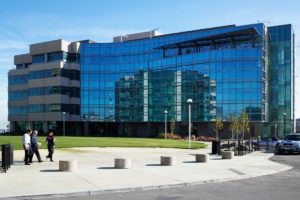 Genentech gets FDA approval for Tecentriq, Avastin combo for HCC