The regulator has accepted the company’ new drug application (NDA) for the combination therapy and as continuation of quizartinib monotherapy after consolidation to treat FLT3-ITD­–positive AML patients.

The FDA has set 24 April 2023 as the Prescription Drug User Fee Act date action date for the regulatory decision.

Daiichi Sankyo R&D global head Ken Takeshita said: “There is a need for new targeted therapy options for patients with acute myeloid leukemia and the results of the QuANTUM-First trial showed that quizartinib in combination with standard chemotherapy has potential to change the current standard of care for newly diagnosed patients with the historically difficult to-treat FLT3-ITD subtype.

“The FDA’s prioritisation of this application reflects the importance of the data, and we will continue to work with the FDA and other global regulatory authorities to support the review of quizartinib for the treatment of patients with newly diagnosed FLT3-ITD positive acute myeloid leukemia.”

The findings showed that quizartinib along with chemotherapy significantly improved the overall survival in newly diagnosed FLT3-ITD–positive AML patients compared to chemotherapy alone. 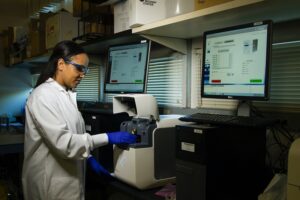