Axial Biotherapeutics, a biotechnology company dedicated to building a unique class of gut-targeted programs for neurodegenerative and neuropsychiatric diseases, announced the completion of a $25m series B equity financing.

New investor Seventure Partners, via its microbiome-focused fund Health for Life Capital™, led the financing along with existing investors Longwood Fund, Domain Associates, Heritage Medical Systems and a group of high net worth individuals based in Southern California.

The new funding will be used to advance Axial’s programs in Parkinson’s disease (PD) and Autism spectrum disorder (ASD). Both programs include small molecules targeting the gut-brain axis.

“We appreciate the strong support from our existing investors and are excited to welcome Seventure, who are deeply committed to supporting visionary companies like Axial, into our investor group,” said David H. Donabedian, Ph.D., Co-founder and CEO of Axial Biotherapeutics. “Leveraging the gut-brain axis, we have made extensive progress in our translational research and are excited to progress our clinical programs in 2019.”

Axial’s PD program, which evaluates organisms and genes over-represented in the PD gut- microbiome, has resulted in the identification of a pathway that is sufficient to induce motor and GI symptoms and brain pathology in a validated, preclinical PD model. Axial’s PD program includes both AB-4166 and the AB-4000 series. AB-4166 is a first-in-class intervention that is currently being evaluated for safety and tolerability in a subpopulation of PD subjects. Axial’s PD program has also identified multiple novel chemical entities in the AB-4000 series which are being developed to have improved selectivity as potential next-generation drug candidates for PD and other neurodegenerative diseases.

Axial’s program in ASD is focused on research which demonstrates that reducing systemic and brain exposure to problematic microbial metabolites may improve core and non-core ASD symptoms related to behavior and gut health. The company’s lead product, AB-2004, is a drug candidate that has demonstrated, in animal models, the ability to repair leaky gut and improve repetitive behavior, anxiety, and ASD-related sensorimotor gating deficits by removing key microbial metabolites. AB-2004 is expected to enter a Phase 1b/2a clinical trial in ASD adolescents in the first quarter of 2019.

“We are impressed by the progress made by Axial’s team and founders in bringing the broad concept of treating neurological diseases and disorders via peripheral targets found in the gut-microbiome, using well-understood mechanisms of action,” said Isabelle de Crémoux, CEO and Managing Partner at Seventure Partners. “We look forward to partnering with David and his team to advance the development of Axial’s promising pipeline into transformative products for patients.” 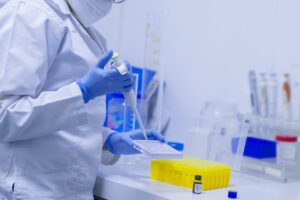