AstraZeneca has secured priority review from the US Food and Drug Administration (FDA) for its cancer drug Imfinzi (durvalumab) for the treatment of extensive-stage small cell lung cancer (SCLC) in previously untreated patients.

Imfinzi holds approvals for the curative-intent setting of unresectable, stage III non-small cell lung cancer (NSCLC) following chemoradiation therapy across 54 countries, including the US, the European Union, and Japan. The approvals in the type of lung cancer were granted based on the results of the phase 3 PACIFIC trial.

The AstraZeneca drug is also approved for the treatment of advanced bladder cancer in previously treated patients, and for locally-advanced or metastatic urothelial carcinoma in various countries.

For its approval in extensive SCLC in treatment-naïve patients, AstraZeneca had submitted the drug’s supplemental Biologics License Application (sBLA) based on the results from the phase 3 CASPIAN trial.

SCLC is considered to be an aggressive, fast-growing form of lung cancer. The condition is known to recur and progress rapidly in spite of initial response to platinum-based chemotherapy.

In the CASPIAN trial, Imfinzi in combination with standard-of-care (SoC) chemotherapy (etoposide with either cisplatin or carboplatin) showed a statistically significant and clinically meaningful improvement in overall survival (OS) compared to SoC alone.

The risk of death with the investigational treatment was brought down by 27% with median OS of 13.0 months compared to 10.3 months recorded for SoC.

According to AstraZeneca, results from the phase 3 trial showed an estimated 33.9% of patients survived at 18 months after receiving the investigational treatment compared to 24.7% of patients who were on SoC treatment.

Imfinzi’s Prescription Drug User Fee Act date for the SCLC indication has been set for the first quarter of 2020 by the FDA. The oncology immunotherapy was previously granted orphan drug designation (ODD) for the same indication by the FDA in July 2019.

Imfinzi is a human monoclonal antibody designed to target the PD-1/PD-L1 pathway. The oncology immunotherapy prevents the interaction of PD-L1 with PD-1 and CD80 proteins and through this mechanism, works against the immune-evading tactics of the tumour to release the inhibition of immune responses. 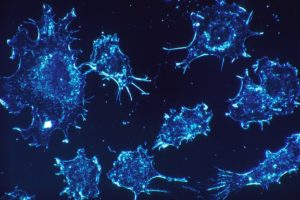