Merck, known as MSD outside the United States and Canada, today announced that the U.S. Food and Drug Administration (FDA) has approved KEYTRUDA, Merck’s anti-PD-1 therapy, as monotherapy for the first-line treatment of patients with unresectable or metastatic microsatellite instability-high (MSI-H) or mismatch repair deficient (dMMR) colorectal cancer.

“Today’s approval has the potential to change the treatment paradigm for the first-line treatment of patients with MSI-H colorectal cancer, based on the important findings from KEYNOTE-177 that showed KEYTRUDA monotherapy demonstrated superior progression-free survival compared to standard of care chemotherapy,” said Dr. Roy Baynes, senior vice president and head of global clinical development, chief medical officer, Merck Research Laboratories. “Our commitment to pursuing biomarker research continues to help us bring new treatments to patients, particularly for those who have few available options.”

Immune-mediated adverse reactions, which may be severe or fatal, can occur with KEYTRUDA, including pneumonitis, colitis, hepatitis, endocrinopathies, nephritis and renal dysfunction, severe skin reactions, solid organ transplant rejection, and complications of allogeneic hematopoietic stem cell transplantation (HSCT). Based on the severity of the adverse reaction, KEYTRUDA should be withheld or discontinued and corticosteroids administered if appropriate. KEYTRUDA can also cause severe or life-threatening infusion-related reactions. Based on its mechanism of action, KEYTRUDA can cause fetal harm when administered to a pregnant woman. For more information, see “Selected Important Safety Information” below.

This approval was granted less than one month following the submission of a new supplemental Biologics License Application (sBLA), which was reviewed under the FDA’s Real-Time Oncology Review (RTOR) pilot program. This review also was conducted under Project Orbis, an initiative of the FDA Oncology Center of Excellence that provides a framework for concurrent submission and review of oncology drugs among its international partners. For this application, a modified Project Orbis was undertaken, and the FDA is collaborating with the Australian Therapeutic Goods Administration, Health Canada and Swissmedic on their ongoing review of the application.

“Patients with unresectable or metastatic MSI-H colorectal cancer have historically faced poor outcomes, and until today, chemotherapy-containing regimens were the only FDA-approved first-line treatment options,” said Luis A. Diaz, M.D., head of the division of Solid Tumor Oncology, Memorial Sloan Kettering Cancer Center. “In patients who were treated with KEYTRUDA and responded (n=67) in the KEYNOTE-177 trial, 43% of patients experienced a duration of response lasting two years or longer. This approval helps address the unmet need to provide a new monotherapy treatment option for patients.”

Treatment with KEYTRUDA or chemotherapy continued until Response Evaluation Criteria in Solid Tumors (RECIST) v1.1-defined progression of disease as determined by the investigator or unacceptable toxicity. Patients treated with KEYTRUDA without disease progression could be treated for up to 24 months. Assessment of tumor status was performed every nine weeks. Patients randomized to chemotherapy were offered KEYTRUDA at the time of disease progression. The main efficacy outcome measure was progression-free survival (PFS) as assessed by blinded independent central review (BICR) according to RECIST v1.1, modified to follow a maximum of 10 target lesions and a maximum of five target lesions per organ, and overall survival (OS). Additional efficacy outcome measures were objective response rate (ORR) and duration of response (DOR).

KEYTRUDA is an anti-PD-1 therapy that works by increasing the ability of the body’s immune system to help detect and fight tumor cells. KEYTRUDA is a humanized monoclonal antibody that blocks the interaction between PD-1 and its ligands, PD-L1 and PD-L2, thereby activating T lymphocytes which may affect both tumor cells and healthy cells.

Merck has the industry’s largest immuno-oncology clinical research program. There are currently more than 1,200 trials studying KEYTRUDA across a wide variety of cancers and treatment settings. The KEYTRUDA clinical program seeks to understand the role of KEYTRUDA across cancers and the factors that may predict a patient’s likelihood of benefitting from treatment with KEYTRUDA, including exploring several different biomarkers. 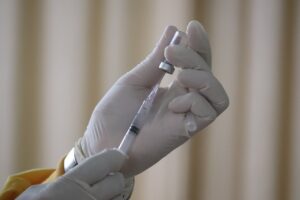