The purpose of this funding round, which will be split into three tranches, is to progress the late-stage clinical development of EpicentRx’s lead anticancer agent, RRx-001, and proprietary transgene-enhanced oncolytic adenoviral platform technology.

“We are extremely grateful to Biotech Alliances for supporting this financing round, which enables us to advance clinical development of our lead cancer programs, including the Phase 3 REPLATINUM trial which recently began enrolling patients,” said Corey A. Carter, M.D., President & CEO of EpicentRx.

“This financing validates the potential and uniqueness of our two complementary anticancer platforms, which reprogram both arms of the immune system, innate and adaptive, to seek out and destroy cancer cells. As a company led by practicing oncologists, it also reinforces our mission to provide hope and additional options to cancer patients by developing new treatments with minimal toxicity,” commented Dr. Carter.

“It was a great pleasure working with the EpicentRx team on this Series D financing which will allow the company to advance their clinical-stage portfolio of novel immunotherapies. Biotech Alliances International was pleased to have exclusively attracted European private financing sources for this $35 million deal,” said Dr. Franck Brinkhaus, CEO of Biotech Alliances.

RRx-001 is a small molecule immunotherapy targeting the CD47 – SIRPα axis. The drug is currently being evaluated in combination with platinum doublet chemotherapy in the Phase 3 REPLATINUM trial for the treatment of third-line and beyond small cell lung cancer.

EpicentRx is also developing a diverse array of oncolytic adenoviruses that are genetically engineered to replicate selectively in cancer cells. Tony Reid, M.D., Ph.D., EpicentRx’s Chief Scientific Officer and Professor of Medicine at the University of California San Diego Moores Cancer Center, discovered and developed the agents. In addition to oncolysis, these adenoviruses have additional and complementary mechanisms of action through therapeutic “arming” with multiple transgenes, that are expressed selectively in cancer cells during replication. The company has identified a lead candidate, TGF-beta trap, that is currently in preparation for Phase 1 trial.

The Series D brings the total capital raised by EpicentRx to approximately $77 million.

RRx-001 is a next generation small molecule immunotherapy being developed by EpicentRx. The therapy targets the CD47 – SIRPα axis and repolarizes tumor associated macrophages (TAMs) and other immunosuppressive cells in the tumor microenvironment to an immunostimulatory phenotype. RRx-001 stimulates the immune system and can be used as monotherapy or in combination with chemotherapy, immunotherapy, radiation and targeted agents, giving the therapy the potential to convert “treatment-resistant” tumors into “treatment-sensitive” tumors. RRx-001 is currently in the Phase 3 REPLATINUM trial for the treatment of third-line and beyond small cell lung cancer (SCLC). RRx-001 is also in the Phase 2 QUADRUPLE THREAT trial for the treatment of SCLC, non-small cell lung cancer, neuroendocrine tumors, ovarian and prostate cancer, and the Phase 2 PREVLAR trial for the prevention of oral mucositis. Clinical studies for the drug have also been conducted for the treatment of colorectal cancer, brain metastases and glioblastoma. 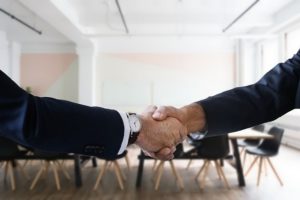