Amgen announced that the European Commission (EC) has approved an expanded indication for BLINCYTO (blinatumomab) monotherapy to include adult patients with Philadelphia chromosome negative (Ph-) CD19 positive B-cell precursor acute lymphoblastic leukemia (ALL) in first or second complete remission with minimal residual disease (MRD) greater than or equal to 0.1 percent.

The approval was based on data from the Phase 2 BLAST study in frontline and relapsed/refractory ALL, the largest prospective trial for MRD-positive ALL ever conducted. BLINCYTO, a bispecific CD19-directed CD3 T cell engager (BiTE), is the first BiTEimmunotherapy to receive regulatory approval globally.

MRD refers to the presence of cancer cells that remain detectable, despite a patient having achieved complete remission by conventional assessment.1 MRD is only measurable through the use of highly sensitive testing methods that detect cancer cells in the bone marrow with a sensitivity of at least one cancer cell in 10,000 cells – versus about one in 20 with a conventional microscope-based evaluation.1-3

“This approval represents a paradigm shift in the management of ALL in the European Union, making BLINCYTO the first and only treatment with marketing authorization to include the presence of MRD,” said David M. Reese, M.D., executive vice president of Research and Development at Amgen. “We are pleased that the European Commission has seen the value BLINCYTO can bring to people living with ALL and are proud to continue to deliver on our commitment to the pursuit of breakthroughs that can transform the lives of cancer patients.”

The EC approval is based on data from the Phase 2 BLAST study, which found that BLINCYTO induced a complete MRD response, or no detectable MRD, in 78 percent of patients within one treatment cycle. Safety results among MRD-positive patients were consistent with the known safety profile of BLINCYTO in relapsed or refractory B-cell precursor ALL.

“Survival rates for patients that achieve MRD-negativity are significantly higher than those for patients that remain MRD-positive, underscoring the critical importance of early testing for and eliminating residual disease in patients with ALL,” said Nicola Gökbuget, M.D., principal investigator for the BLAST study and head of the German Multicenter Study Group for Adult ALL located in Frankfurt, Germany. “Data from the BLAST study demonstrated that BLINCYTO is effective in eliminating detectable residual disease and showed the potential to improve relapse-free survival in this patient population. Today’s approval provides physicians across Europe with a much-needed treatment option that can potentially help prevent a relapse, which is associated with a very unfortunate prognosis.”

Approval via the centralized procedure allows for obtaining a marketing authorization from the EC, which is valid in all European Union (EU) and European Economic Area (EEA)-European Free Trade Association (EFTA) states (Norway, Iceland and Liechtenstein).

In March 2018, the U.S. Food and Drug Administration (FDA) approved BLINCYTO for the treatment of adults and children with B-cell precursor ALL in first or second complete remission with MRD greater than or equal to 0.1 percent.

BLINCYTO is the first immunotherapy from Amgen’s BiTE® platform, an innovative approach that helps the body’s immune system target cancer cells. BiTE® antibody construct technology, pioneered by Amgen, is an innovative treatment approach that helps the body’s immune system attack cancer cells without the removal of immune cells from the patient. Amgen is studying a number of “off-the-shelf” investigational BiTE® immunotherapies, with distinct targets, across a range of hematologic and solid tumors.

The BLAST study is the largest ever prospective trial in patients with MRD-positive ALL. It is an open-label, multicenter, single-arm, Phase 2 study evaluating the efficacy, safety and tolerability of BLINCYTO in adult patients with MRD-positive B-cell precursor ALL in complete hematologic remission after three or more cycles of intensive chemotherapy. Patients received continuous IV infusion of BLINCYTO 15 μg/m2/d for four weeks, followed by two weeks off. Patients received up to four cycles of treatment and could undergo hematopoietic stem cell transplantation at any time after the first cycle, if eligible. Efficacy was based on achievement of undetectable MRD within one cycle of BLINCYTO treatment and hematological relapse-free survival (RFS). Additional secondary endpoints included incidence and severity of adverse events, overall survival, time to hematological remission and duration of complete MRD response.

Results from the BLAST study were presented at the 57th American Society of Hematology (ASH) Annual Meeting & Exposition in 2015 and published in Blood in 2018. Long-term overall survival (OS) data results from the BLAST study were also featured in an oral presentation during the ASH 2018 Annual Meeting & Exposition on Dec. 3, 2018.

ALL is a rapidly progressing cancer of the blood and bone marrow that occurs in both adults and children.4,5 Poor outcomes have been observed in patients who achieve first or second complete hematologic remission but have persistent MRD, which remains detectable at the molecular level after treatment.1,6 For more information about MRD, please visit AmgenOncology.com.

Bispecific T cell engager (BiTE®) antibody construct is an innovative technology that can be engineered to target any tumor antigen expressed by any type of cancer. The protein molecules are designed to kill malignant cells using the patient’s own immune system by bridging T cells to tumor cells. The BiTE® antibody construct helps connect the T cells to the targeted cell, with the intent of causing T cells to inject toxins which trigger cancer cell death (apoptosis). Amgen is developing BiTE® antibody constructs to uniquely (or specifically) target numerous hematologic malignancies and solid tumors.

BLINCYTO is now approved in 57 countries, including all member countries in the EU and EEA, Canada, Japan and Australia. 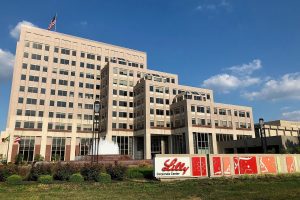