Deciphera Pharmaceuticals announced that the US Food and Drug Administration (FDA) has accepted for Priority Review its New Drug Application (NDA) seeking approval for ripretinib, the Company’s investigational broad-spectrum KIT and PDGFRα inhibitor, for the treatment of patients with advanced gastrointestinal stromal tumors (GIST).

The FDA granted Priority Review for the NDA, which provides for a six-month review, and assigned a Prescription Drug User Fee Act (PDUFA) target action date of August 13, 2020.

“The FDA’s acceptance of our NDA brings us one step closer to our goal of providing patients with advanced GIST a potential new treatment option,” said Steve Hoerter, President and Chief Executive Officer of Deciphera. “With commercial preparations already underway, we believe we will be well positioned for a potential U.S. launch in 2020. We look forward to working with the FDA during their review of this application.”

Priority Review designation is for drugs that, if approved, would be significant improvements in the safety or effectiveness of the treatment, diagnosis, or prevention of serious conditions when compared to standard applications. Under the PDUFA, a Priority Review targets a review time of six months compared to a standard review time of ten months. The FDA previously granted Breakthrough Therapy Designation (BTD) for ripretinib for the treatment of patients with advanced GIST who have received prior treatment with imatinib, sunitinib, and regorafenib. BTD is designed to expedite the development and review of drugs that are intended to treat a serious condition and preliminary clinical evidence indicates that the drug may demonstrate substantial improvement over available therapy.

The NDA is being reviewed by the FDA under the Oncology Center of Excellence Real-Time Oncology Review (RTOR) pilot program. This pilot program aims to explore a more efficient review process to ensure that safe and effective treatments are available to patients as early as possible, while maintaining and improving review quality.

In addition, the Company has submitted additional marketing applications in Canada and Australia for ripretinib in advanced GIST. These submissions are part of the FDA’s Project Orbis pilot program and both received Priority Review designations. The Project Orbis pilot program, an initiative of the FDA Oncology Center of Excellence, is designed to provide a framework for concurrent submission and review of oncology products among international partners

The NDA submission is supported by positive results from the Company’s INVICTUS pivotal Phase 3 study of ripretinib in advanced GIST. INVICTUS is a randomized (2:1), double-blind, placebo-controlled, international, multicenter study designed to evaluate the efficacy and safety of ripretinib compared to placebo in 129 patients with advanced GIST whose previous therapies have included at least imatinib, sunitinib, and regorafenib.

Ripretinib is an investigational tyrosine kinase switch control inhibitor that was engineered to broadly inhibit KIT and PDGFRα mutated kinases by using a unique dual mechanism of action that regulates the kinase switch pocket and activation loop. Ripretinib is currently in clinical development for the treatment of KIT and/or PDGFRα-driven cancers, including gastrointestinal stromal tumors, or GIST, systemic mastocytosis, or SM, and other cancers.

Ripretinib inhibits initiating and secondary KIT mutations in exons 9, 11, 13, 14, 17, and 18, involved in GIST, as well as the primary exon 17 D816V mutation involved in SM. Ripretinib also inhibits primary PDGFRα mutations in exons 12, 14, and 18, including the exon 18 D842V mutation, involved in a subset of GIST. Ripretinib has been granted Fast Track Designation and Breakthrough Therapy Designation by the FDA for the treatment of patients with advanced GIST who have received prior treatment with imatinib, sunitinib, and regorafenib. 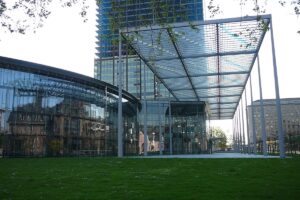