Roche announced that the European Medicines Agency’s (EMA) Committee for Medicinal Products for Human Use (CHMP) has recommended the approval of Tecentriq (atezolizumab) plus chemotherapy (Abraxane; nab-paclitaxel) for the treatment of adult patients with unresectable locally advanced or metastatic triple-negative breast cancer (TNBC) whose tumours have PD-L1 expression (≥ 1%) and who have not received prior chemotherapy for metastatic disease.

The CHMP recommendation is based on data from the Phase III IMpassion130 study, which demonstrated that Tecentriq plus nab-paclitaxel significantly reduced the risk of disease worsening or death (progression-free survival; PFS) by 38% compared with nab-paclitaxel alone (median PFS=7.5 vs 5 months; HR=0.62, 95% CI: 0.49–0.78, p<0.0001) in people who were tested positive for PD-L1 expression on tumour-infiltrating immune cells (IC).

The Tecentriq combination showed a clinically meaningful overall survival (OS) improvement of seven months vs nab-paclitaxel alone in the PD-L1-positive population (median OS=25.0 vs 18.0 months; HR=0.71, 95% CI: 0.54–0.93). OS results in the PD-L1-positive population were not formally tested due to the hierarchical design of the study, as statistical significance was not met for OS in the intention-to-treat (ITT) population (median OS=21.0 vs 18.7 months; HR=0.86, 95% CI: 0.72–1.02, p=0.078). The study will continue until the next planned analysis.

The assessment of PD-L1 on tumour-infiltrating immune cells is essential for identifying the TNBC patients benefiting from this Tecentriq combination. PD-L1 expression status in the IMpassion130 study was assessed by the VENTANA PD-L1 (SP142) assay.

Safety in the Tecentriq plus nab-paclitaxel arm appeared consistent with the known safety profiles of the individual study medicines or underlying disease, and no new safety signals were identified with the combination. Serious adverse events (SAEs) were reported in 23% of people receiving Tecentriq plus nab-paclitaxel, compared with 18% of people receiving chemotherapy alone.

Currently, Roche has seven ongoing Phase III studies investigating Tecentriq in TNBC, including early and advanced stages of the disease.

Performing a test for statistical significance for OS in the PD-L1-positive population is dependent upon OS results from all randomised patients. PD-L1 expression status was assessed by the VENTANA PD-L1 (SP142) Assay. Secondary endpoints include objective response rate and duration of response.

Breast cancer is the most common cancer among women, with more than 2 million diagnosed worldwide each year.1 TNBC represents 15% of all breast cancers and is more common in women under the age of 50, compared with other forms of breast cancer.2,3,4 It is defined by the lack of expression and/or amplification of the targetable receptors for oestrogen, progesterone and HER2 amplification.5 Patients with metastatic TNBC generally experience rapid progression and shorter OS, compared with other subtypes of breast cancer.

Tecentriq is a monoclonal antibody designed to bind with a protein called PD-L1, which is expressed on tumour cells and tumour-infiltrating immune cells, blocking its interactions with both PD-1 and B7.1 receptors. By inhibiting PD-L1, Tecentriq may enable the activation of T cells.

Tecentriq is a cancer immunotherapy (CIT) that has the potential to be used as a foundational combination partner with other immunotherapies, targeted medicines and various chemotherapies across a broad range of cancers. The development of Tecentriq and its clinical programme is based on our greater understanding of how the immune system interacts with tumours and how harnessing a person’s immune system combats cancer more effectively.

Tecentriq is approved in the US, EU and/or countries around the world, either alone or in combination with targeted therapies and/or chemotherapies in various forms of non-small cell and small cell lung cancer, certain types of metastatic urothelial cancer, and in PD-L1-positive triple-negative breast cancer. 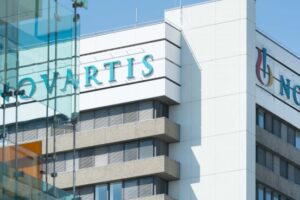