AVROBIO, a leading clinical-stage gene therapy company with a mission to free people from a lifetime of genetic disease, announced that the European Commission (EC) has granted orphan drug designation for AVR-RD-02, the company’s investigational gene therapy for the treatment of Gaucher disease.

AVR-RD-02 consists of the patient’s own hematopoietic stem cells, genetically modified to express glucocerebrosidase (GCase), the enzyme that is deficient in Gaucher disease. AVROBIO recently dosed the first patient in the GuardOne Phase 1/2 clinical trial to evaluate the safety and efficacy of AVR-RD-02.

“Like many lysosomal disorders, Gaucher disease can lead to debilitating complications throughout the body and brain. The standard of care does not address all these symptoms and may not be able to halt progression of the disease,” said Geoff MacKay, AVROBIO’s president and CEO. “Our investigational gene therapy is designed to address the head-to-toe manifestations of Gaucher disease with a single dose. We’re pleased to receive orphan drug designation, which recognizes the potential of our approach to transform the standard of care – and, we hope, the quality of life – for people living with this rare genetic disorder.”

Gaucher disease is a rare, inherited lysosomal storage disorder characterized by the toxic accumulation of glucosylceramide (GlcCer) and glucosylsphingosine (GlcSph) in macrophages. Macrophages bloated with these fatty substances are called Gaucher cells which amass primarily in the spleen, liver and bone marrow. This results in a variety of potential symptoms, including grossly enlarged liver and spleen, bone issues, fatigue, low hemoglobin levels and platelet counts and an adjusted lifetime relative risk of developing Parkinson’s disease that may be more than 20 times greater than the general population. Even on enzyme replacement therapy (ERT) – the current standard of care – people with Gaucher disease type 1 typically have a shortened life expectancy and may experience debilitating symptoms that significantly reduce their quality of life. An estimated 1 in 44,000 people are diagnosed with Gaucher disease.

AVR-RD-02 is an investigational lentiviral gene therapy designed to provide a durable therapeutic benefit for people living with Gaucher disease. The therapy starts with the patient’s own hematopoietic stem cells, which are genetically modified to express functional glucocerebrosidase (GCase). Functional GCase reduces levels of glucosylceramide and glucosylsphingosine, the accumulated substances which cause the symptoms of Gaucher disease. AVROBIO is currently evaluating AVR-RD-02 in GuardOne, a Phase 1/2 clinical trial. 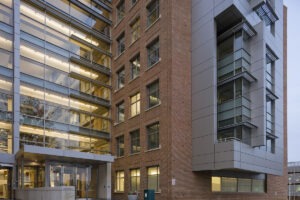