This designation is given to medications with the potential to treat rare conditions — those that affect fewer than 200,000 people in the U.S. Benefits include exemption from fees, financial incentives for clinical development, and seven years of market exclusivity if the treatment is approved.

Erythromelalgia is a rare condition that primarily affects the feet and less commonly the hands. It is characterized by intense, burning pain, severe redness and increased skin temperature either episodic or almost continuous. Whilst erythromelalgia is deemed to result from vasomotor abnormalities or dysfunction in the normal constriction and dilation of the caliber of certain blood vessels, the pain of erythromelalgia is thought to be associated with sodium channel dysfunction.

The ATX01 program primarily targets Chemotherapy-Induced Peripheral Neuropathy. Via topical administration of a proprietary high-concentration amitriptyline gel, ATX01 aims to directly reach the damaged nerve fibers in the skin and avoid the systemic side-effects of oral and injectable compounds. Pre-clinical investigation evidenced the anti-nociceptive activity of topical amitriptyline on voltage-gated sodium-channels Nav1.7, Nav1.8 and Nav1.9 and on peripheral sensory nerve fibers Aβ, A∂ and C. With its pre-clinical development complete, ATX01 will enter into Phase I clinical development in late 2020.

“The opportunity to investigate ATX01 in erythromelalgia is an exciting medical pursuit as those patients have very few options to relieve considerable pain. It provides us with an opportunity to further our understanding of ATX01’s activity on Nav1.7 in a pre-clinical and clinical setting”, says Stéphane Thiroloix, AlgoTherapeutix’s founder and CEO. 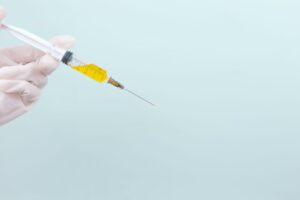